Split was the first city where I noticed converging cultures. It’s bustling city and diversity was something we hadn’t seen along the Adriatic thus far. I happily sat down to a burger and fries, and although I wouldn’t call that a “cultural” experience, I welcomed it. After encountering menu after menu of Black Cuttlefish Risotto, I would’ve happily consumed McDonald’s… I know, terrible. Haha.

We arrived early on a sweltering day via boat, dropped our bags at one of the most unique hotels I’ve ever stayed, inside Diocletian’s Palace walls, and then set off to explore. I wish I had a picture inside our room. The exposed stone built and preserved since the turn of the fourth century was pretty spectacular. Here is the courtyard and staircase leading to Palace Judita Heritage Hotel. I mean… (insert multiple heart-eye emojis)

We opted for an underground experience as the mid-day sun was blistering. The underground complex held a market full of all sorts of goods to take home, including massive amounts of Game Of Thrones memorabilia. We decided to take the self-guided tour of the section that is set up as a museum, but we probably should have paid for a tour-guide. You really have to use your imagination to understand what you were looking at, and some history from someone who knew it well would have been helpful, and could’ve made the experience more enjoyable. None-the-less, Beckett had a good time running around and the hubs and I were happy to be out of the sun.

The rendering shows how massive this “retirement home” for Diocletian was.

These hand-carved stone blocks on the ceiling were really beautiful.

An underground garden and more.

The Peristyle was alive with tourists and we couldn’t help getting a photo with these Roman Soldiers.

Here, a 3500 year old Egyptian granite sphinx sits perched above the crowd and several more snaps around the palace.

This city also marked the end of our travels as a group, our final destination before we quite literally split into three different directions.

A Letter to my Daughter 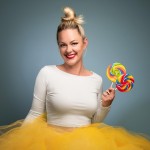